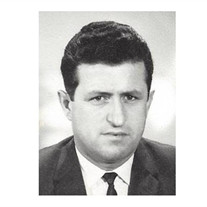 Risto Trajcevski, 85, of Syracuse, passed away quietly in his sleep on Tuesday at St. Joseph’s Hospital. Risto was born on September 20, 1928 in Velusina, Macedonia, and lived in Syracuse for over 50 years. Risto arrived in the United States in 1964 in Paterson, NJ and settled with his family in Syracuse in 1968. He worked at B.J. Sulzle Inc. for 22 years, retiring in 1994. Risto was predeceased by his wife Danica in 1997 and his brother, Petre, in 1989. A beloved husband, father and grandfather, he enjoyed his time with dear friends in the Macedonian community. He took great pleasure in tending to his vast vegetable garden. He instilled in his family a diligent work ethic for which we are grateful. He was a long standing and committed member of St. George Macedonian Orthodox Church. Risto is survived by two sons: Tony (Stojna) Trajcevski of Syracuse and Ljupco (Jaime) Trajcevski of West Hartford, CT; a sister Donka (Vangel) Mangovski of Syracuse; four grandchildren, Diana, Angelina, Dimce, and Danica; two great grandchildren: Nikola and Kristina; and several nieces and nephews. Funeral Services: 9:00 AM Thursday, July 3rd, at the Giminski-Wysocki Funeral Home, followed by a 10 AM service at St. George Macedonian Eastern Orthodox Church, 5083 Onondaga Road in Syracuse. Burial: Woodlawn Cemetery. Friends may call from 4 to 7 p.m. Wednesday, with a Trisagion Prayer Service at 6 PM. at the Funeral Home, 1320 W. Genesee St. in Syracuse.

Risto Trajcevski, 85, of Syracuse, passed away quietly in his sleep on Tuesday at St. Joseph&#8217;s Hospital. Risto was born on September 20, 1928 in Velusina, Macedonia, and lived in Syracuse for over 50 years. Risto arrived in the United... View Obituary & Service Information

The family of Risto Trajcevski created this Life Tributes page to make it easy to share your memories.

Risto Trajcevski, 85, of Syracuse, passed away quietly in his...

Send flowers to the Trajcevski family.