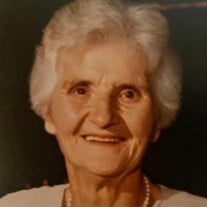 Lucy (Kuczynska) Lisaj, 90, of Baldwinsville, peacefully passed away Tuesday at the Cunningham, Loretto Nursing Home. She was born in Goniadz, Poland, on January 21, 1930, daughter of the late Joseph and Leokadia Kuczynski. Lucy survived both the Nazi, and later Russian, invasions of Poland during the war and emigrated to the United States when the war ended. She met and fell in love with Victor Lisaj in Brooklyn, NY and had a daughter Dorothy (Dorotka). Lucy was an accomplished seamstress and worked for several companies in Brooklyn, specializing in creating beautiful wedding gowns and men’s suits. She enjoyed sewing, knitting, crocheting, and gardening, and was especially proud of her three grandchildren, Diana, Charles, and Matthew Kline. They fondly remember their Babci’s constant question, “Are you hungry?” Lucy always said, "What’s mine is yours", and constantly placed the needs of others before herself. Along with her parents, Lucy was predeceased by her husband of 50 years, Victor, as well as her sister, Jadwiga. Lucy is survived by her daughter, Dorothy (Charles) Kline of Baldwinsville; three grandchildren: Diana (Jason) Warner and Charles M. Kline, both of Baldwinsville, and Matthew J. Kline of Elbridge; four great-grandchildren and several nieces and nephews. Calling hours will be held at the Giminski Wysocki Funeral Home; 1320 W. Genesee St., Syracuse, NY 13204, on Monday, March 2, 2020 from 8:30 to 9:15 AM. A Mass of Christian Burial will be held immediately afterward, at the Basilica of the Sacred Heart of Jesus, at 9:30 AM. Entombment will be at Sacred Heart Cemetery in Lakeland. In lieu of flowers or contributions, we’re certain Lucy would instead ask everyone to take time to love their family and spend quality time with their grandchildren. Kochamy Cie, Babciu.

Lucy (Kuczynska) Lisaj, 90, of Baldwinsville, peacefully passed away Tuesday at the Cunningham, Loretto Nursing Home. She was born in Goniadz, Poland, on January 21, 1930, daughter of the late Joseph and Leokadia Kuczynski. Lucy survived both... View Obituary & Service Information

The family of Lucy Kuczynska Lisaj created this Life Tributes page to make it easy to share your memories.

Send flowers to the Lisaj family.