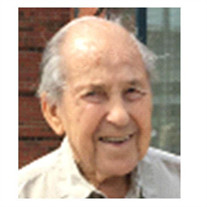 Joseph Thaddeus Chilinski (“Dad”), 94, peacefully passed away Monday, at St. Joseph’s Hospital in the company of his three loving sons; Richard, David and Steven. Dad was born on December 17, 1924 and is predeceased by his lovely bride Sophie, with whom he was married sixty-six years and now has been reunited once again, this time forever. Dad was the son of Constantine and Sophie Chilinski and was a life-long resident of Syracuse, New York. Dad embodied the Greatest Generation with his love of God, family and country. He served in the U.S. Navy during World War II as a Machinist’s Mate Second class on the destroyer USS Satterlee. After his tours of duty in the Pacific and Atlantic theaters, he met and married his beloved Sophie (“Mom”). Born with the talent and intellect to solve problems, and with Mom, he finished constructing the family home in Syracuse and remained there until his passing. Dad was the first in his family to attend college and received a bachelor’s degree in Mechanical Engineering from Syracuse University in 1950 and was a certified member of the Honor Society Fraternity Pi Tau Sigma. While Dad was a major talent in his field, he admits he did struggle with “the calculus”. Dad was a thoughtful man in both the physical world and in life. His intellect, passions and hard work throughout his lifelong journey served as a major step forward and springboard from which his family and sons flourished --- each son attending notable colleges and achieving successes largely due to the strong foundation of values and principles instilled by Mom and Dad and forever which we are most and deeply grateful. A rugged individualist, Dad never met a mountain high enough for which he would not conquer and reach its summit (although he admits he did find himself lost “once”). Following this passion, he qualified for membership as a 46er in the Adirondack Mountain Club, climbing all 4,000 ft high summits in the expansive wilderness of the Adirondack Mountains. Dad retired from GE and never met a mechanical problem he could not solve and even designed a mine hunting sonar system which withstands the tremendous pressures deep within our planet’s oceans; to this day protecting our country’s interests and keeping our energy and commerce flowing in such regions as the oil rich Persian Gulf. Dad loved the adventure of the outdoors, enjoying hiking, cross-county skiing, golfing, camping, sailing, hunting and fishing with family and friends. While at St. Joseph’s, Dad’s adventurous spirit continued as he independently roamed the halls in his wheel chair and stating unceasingly, “Come on now, let’s go home.” Dad is survived by his sons and their brides, partners and children: Richard (Francesca with Kristen), David (Maureen with Julia and Libby) and Steven (Lisa with Alexis and Melissa). He is also survived by numerous nieces, nephews, grandchildren and three great grandchildren; having been predeceased by his father and mother, his brothers: Walter, Frank, Ted, Ed and Victor and sisters Helen and Teresa. Dad, we will miss you deeply and hold you in our hearts always, and while away for now we will join you once again; we know you along with Mom will be watching and caring for us as you both have always so lovingly done. We shall keep you in our prayers forever, make you proud, and share with others the light you so selflessly shone upon us. God Speed and now with Mom forever --- Keep On Climbing!!! Calling hours for family and friends are Sunday, February 17, from 1 to 4 pm at Giminski Wysocki Funeral Home; 1320 W. Genesee Street. A Mass of Christian Burial will be held at 9:30 am Monday, February 18, at the Basilica of the Sacred Heart of Jesus; 927 Park Avenue. He will be laid to rest at Sacred Heart Cemetery in the Town of Geddes, with a reception following at the Polish Home; 915 Park Avenue.

The family of Joseph Thaddeus Chilinski created this Life Tributes page to make it easy to share your memories.

Send flowers to the Chilinski family.