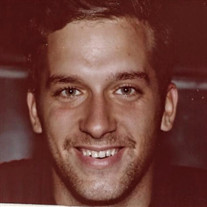 Jon Richard Sanford, 60, of Syracuse passed away Saturday, December 16, 2017 after a courageous 26-year battle with ALS. He died surrounded by family. Jon is a graduate of Nottingham High School ('75), and joined the Marines after graduation. He earned the rank of Sergeant and was in charge of the rifle range. After he was honorably discharged in 1979, he attended OCC and SUNY Utica where he earned his degree in Mechanical Engineering. He worked for Morse Manufacturing Inc. for several years, before his illness forced an early retirement. Throughout the years, he never lost his sense of humor, never complained, and dealt with his illness with grace. Words alone cannot describe what a wonderful, caring, selfless man he was when his situation could have easily made him bitter and angry. Surviving are his wife of 32 years Theresa (Galaj), daughters Nicole and Danielle (Thomas) Sorensen, sisters Barb, Mary Berry and Susan, and brother Stephen. A huge thank you to Bob Andrews and his co-workers at Morse Manufacturing for the continued support throughout the years, and never failing to keep Jon's memory alive at the office. Another thank you to Dr. Kaul and Dr. Chan and the 6th Floor Medical ICU staff at the VA Medical Center for their compassionate care during his final hours. And thank you to the home-care nurses who spent innumerable days and nights taking care of Jon in his own home. Calling hours will be Tuesday from 4:00 to 7:00 pm at Giminski-Wysocki Funeral Home; 1320 W. Genesee St. Syracuse. A funeral service will be held Wednesday, at 9:30 am at The Basilica of the Sacred Heart of Jesus; 927 Park Ave, Syracuse. Burial: Sacred Heart Cemetery, Lakeland. In lieu of flowers, contributions can be made in Jon's name to the ALS Association; Gift Processing Center, PO Box 37022 Boone, IA 50037-0022.

Jon Richard Sanford, 60, of Syracuse passed away Saturday, December 16, 2017 after a courageous 26-year battle with ALS. He died surrounded by family. Jon is a graduate of Nottingham High School ('75), and joined the Marines after graduation.... View Obituary & Service Information

The family of Jon Richard Sanford created this Life Tributes page to make it easy to share your memories.

Send flowers to the Sanford family.