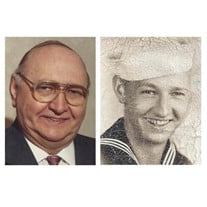 John S. Andrews (Andrzjewski), 92, of Syracuse passed away peacefully at the Onondaga Center. He was born at home on December 6, 1927 to his late parents, Stanislow and Zofia Andrzjewski. John graduated from Vocational High School in 1944 and immediately enlisted in the US Navy; assigned as a "Titless Wave", he commanded a Royal typewriter until being discharged. He was forever grateful to President Truman for ending the war before he was deployed overseas. After the war, John went to work at the A & P Stores in various positions, from stock clerk to store manager. He met his ex-wife Beverly Sackett (Griep) there and they married in 1951; it was a union that lasted until 1968 when he embarked on a path of happy bachelorhood. After retirement he worked briefly at Peters Grocery, then retired again to a bar stool and recliner to watch TV, read books and do puzzles. Always the contrarian, his favorite teams were whoever the Yankees or Giants were playing against. He also enjoyed watching SU Womens basketball games more then the men. His favorite pastime was "socializing" alone, with beer in hand, whether sitting on the front steps or patio, no matter what the weather, to wave at passers by. He was a long time member of the UCFW Union and the Pulaski Post American Legion. In addition to his parents, John is predeceased by five siblings; his daughters Cynthia Antonacci and Deborah Revette Casolare and his ex-wife Beverly Sackett (Griep). He is survived by his daughter Pamela (Tom) Corbett; his son John (Lisa) Andrews; his sister, Ann Bieloski; eight grandchildren, seven great grandchildren, two great-great grandchildren and many nieces and nephews. Family will greet friends Thursday, November 5, from 4:00 to 7:00 pm, followed immediately by a service, at Giminski-Wysocki Funeral Home; 1320 W. Genesee Street. Burial will be in the Onondaga County Veterans Memorial Cemetery. Facial coverings are required and NYS guidelines on gatherings will be observed.

John S. Andrews (Andrzjewski), 92, of Syracuse passed away peacefully at the Onondaga Center. He was born at home on December 6, 1927 to his late parents, Stanislow and Zofia Andrzjewski. John graduated from Vocational High School in 1944... View Obituary & Service Information

The family of John S. Andrews created this Life Tributes page to make it easy to share your memories.

Send flowers to the Andrews family.