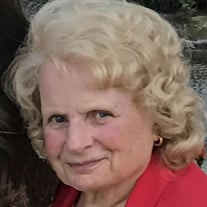 Joan M. Michaels passed away July 16th, 2020, after a series of extended illnesses. She was 82. The family regrets not having published timely announcements or services after her passing. Due to restrictions of Covid-19, the memorial will be announced and held at a later date in Syracuse, NY. She was born April 16th, 1938 in Syracuse, NY to the late Frank & Hedwig (Agnes) Bogdan. She resided in Central Square for most of her adult life; married for nearly 33 years to her husband, Dick. She moved to Southern California to be closer to her children and grandchildren 15 years ago. After graduating from Sacred Heart Academy High School in Syracuse in 1955, she married her high school sweetheart, Dick Michaels. They enjoyed family life together residing in Central Square, with life long friends made while living there. She enjoyed camping outside of Lowville, NY with her young family and traveling along the East Coast. Cancun, Mexico was an annual repeat destination to which she looked forward. One of her favorite pastimes was volunteering with the ladies of the Lioness Club, and enjoying the friendship and community projects they worked on, such as the Apple Festival. She also served on the board of directors for a time while in the Lioness Club. Joan is predeceased by her late husband, Richard (Dick) Michaels (September 1989) and her younger brother, Ronald Bogdan (March 2017) of Glastonbury, Connecticut. Joan is lovingly remembered by her daughter, Gail and son-in-law, Michael (Camarillo); granddaughters, Alexa (Denver) and Ashley (Los Angeles) and son, Rick (Chula Vista, California). Also, by her sister-in-law, Janet Bogdan (Glastonbury, Connecticut) and two nephews: Derek (wife Stacie) and Greg (wife Christi), both residing near Chicago, Illinois. Joan leaves behind several cousins in Syracuse, as well. Graveside services were held on Monday, August 2, 2021 at 11:00 AM. Her final resting place is Sacred Heart Cemetery in Geddes, near all her Family of Angels. In lieu of flowers, donations can be made to the Lupus Foundation of America: Lupus.org/northeast or The Lioness Club of Central Square, New York 13036 at: http://centralsquareapplefestival.com/donations.htm.

Joan M. Michaels passed away July 16th, 2020, after a series of extended illnesses. She was 82. The family regrets not having published timely announcements or services after her passing. Due to restrictions of Covid-19, the memorial will be... View Obituary & Service Information

The family of Joan A. Michaels created this Life Tributes page to make it easy to share your memories.

Send flowers to the Michaels family.