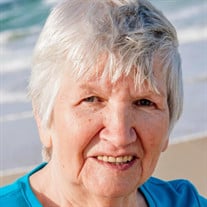 Irena Tyszka, 79, of Syracuse, NY passed away at home after a short illness. She was born on a farm in Koziki, Poland, just outside of Warsaw. After completing her education and moving off of the farm, she worked as a bookkeeper for a number of years at the civic center Piski Dom Kultury in Pisz, Poland, where she loved to see performances by artists that came through. She met her husband while he was on vacation in Poland and they corresponded over a period of several years before marrying in Poland and moving to Syracuse. Upon landing in Syracuse in January 1976, she had thought she had gone in the wrong direction and landed in Siberia. Regardless of the weather, she stayed and became a citizen of the United States several years later. She was a loving mother and grandmother and created a home that was welcoming to all her guests, often offering a coffee and a sample of her famous golumpki or poppy seed bread. For the kids, there was always fresh cut fruit. She loved being outdoors and working in the yard, often tending to her various flowers, herbs and plants. Every spring she would plant red and white geraniums to represent the Polish flag in the planters in front of her house. She enjoyed traveling with family, going to destinations such as Poland, Hawaii, Disney World, the Outer Banks and New York City. Known for her kindness and her sense of humor she was beloved by family, friends and neighbors and she will be deeply missed. Irena was predeceased by her husband, Raymond, in 2001. She is survived by her sons Michael (Brooke), John (Steven) and Paul (Beth); grandchildren Alexander, William, Benjamin, Henry and Lillian; sister Kystyna (Antoni) and brother Jozef (Zena). Family and friends may call from 4:00 to 7:00 PM Friday at the Giminski-Wysocki Funeral Home; 1320 West Genesee Street in Syracuse. A Mass of Christian Burial will be held 9:30 AM Saturday at The Basilica of Sacred Heart of Jesus; 927 Park Ave in Syracuse. Burial: Sacred Heart Cemetery in Lakeland. In lieu of flowers, the family asks that you make contributions to the Hospice of CNY; 990 7th N St, Liverpool, NY 13088. Proper face covering will be used at all times.

Irena Tyszka, 79, of Syracuse, NY passed away at home after a short illness. She was born on a farm in Koziki, Poland, just outside of Warsaw. After completing her education and moving off of the farm, she worked as a bookkeeper for a number... View Obituary & Service Information

The family of Irena Tyszka created this Life Tributes page to make it easy to share your memories.

Irena Tyszka, 79, of Syracuse, NY passed away at home after a...

Send flowers to the Tyszka family.