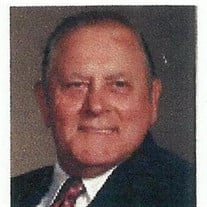 Frank Sakowski was called to Heaven on Friday, May 20, 2016. Born in 1924 to Ann and Stanley Sakowski, he was the seventh of eight children. He was predeceased by brothers: Stanley, William, Matthew and Walter; and sisters Agnes McDermot, Mamie Swiderski and Jane Zajac. Frank served in WWII and was very proud of his service to his country. He was a paratrooper in the 82nd Airborne, 508 Parachute Infantry Regiment and participated in the Invasion of Normandy, the jump into France (Sainte Mere'-Eglise), the Invasion of Holland and the Battle of the Bulge. He was a member of the American Legion, Veterans of Foreign Wars, Disabled American Veterans and Veterans of the Battle of the Bulge, and had received many honors and medals. He remained in contact with many of his fellow servicemen over the years. He, his wife Helen and some of his remaining regiment had even traveled to Europe for the 50th Anniversary of D-Day. After his discharge from the Army, he worked various jobs before finding his niche as a letter carrier in the US Postal Service, where he ultimately retired. He was a proud member of the National Association of Retired Federal Employees, the National Association of Letter Carriers and was a past president of the Polish American Citizens Home. He lived a full life and managed to overcome many health issues throughout the years with the support of his loving family: his wife of 69 years, Helen (Poplawski); his children, son Thomas (Roxanne); daughter Patricia Bartowski (Michael); grandchildren Mike Bartowski (Meredith Cantor-Feller), Scott Bartowski (Amanda Lappin), Holly and Aaron Herringshaw, Amanda Sakowski (James Martin); and great grandchildren Alora and Ava Herringshaw; all of which brought him great joy. There are many nieces, nephews, family and friends who will mourn his loss. Family was always very important to Frank, and he will always be remembered as a loving husband, father, dziadzi, uncle and friend. The family would also like to thank the VA Hospital, ER staff, doctors, nurses and other medical staff for their heartfelt care during this recent event and throughout these many years. A Mass of Christian Burial will be held 9:30 AM Tuesday, at the Basilica of the Sacred Heart of Jesus; 927 Park Avenue, Syracuse. Friends may call upon the family from 4:00 to 7:00 PM Monday, at the Giminski-Wysocki Funeral Home; 1320 W. Genesee Street, Syracuse. Burial: Sacred Heart Cemetery in Lakeland.

Frank Sakowski was called to Heaven on Friday, May 20, 2016. Born in 1924 to Ann and Stanley Sakowski, he was the seventh of eight children. He was predeceased by brothers: Stanley, William, Matthew and Walter; and sisters Agnes McDermot, Mamie... View Obituary & Service Information

The family of Frank S. Sakowski created this Life Tributes page to make it easy to share your memories.

Send flowers to the Sakowski family.