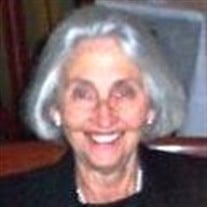 Frances Koziol Frickey, age 79, of Syracuse, NY, passed away on Friday, March 7, 2014. She was born to the late Joseph Koziol and Stella Zacharek on December 18, 1934. Fran attended Syracuse Central High School before attending the Crouse Irving Nursing School and then continued on to receive her B.S. in Nursing at Nazareth College in Rochester, NY. She began her career as a nurse at Crouse Irving Hospital and transitioned to private duty nursing. Fran had an adventurous spirit. She lived and traveled to many places throughout her life. For many years, she and her husband had a home on Skaneateles Lake and spent their vacations in Sanibel Island, Florida. She truly enjoyed the water and wildlife in both places. Most recently, her home was Colorado Springs where she had grandchildren nearby. Family was Fran's love and joy. She was married for 57 years and adored her two sons and their families. She was Grandma to four grandchildren, Aunt Fran to nine nieces and nephews, and Gaffy to their children. She loved to cook and bake, and her kitchen was often filled with her loved ones. Fran is survived by her husband Paul H. Frickey; her son, Darryl; his wife, Diane; their children, Amelia and Andrew; her son, Derek; his wife, Debbie; and their children, Connor and Audra. She also leaves behind her sister, Cynthia Loftus; and many dear relatives and friends who will miss her caring spirit and humor. A Mass of Christian Burial will be held at the Basilica of the Sacred Heart of Jesus in Syracuse on Saturday, March 15, 2014 at 9:30 a.m. In lieu of flowers, donations may be made to the Parkinson's Disease Foundation.

The family of Frances Koziol Frickey created this Life Tributes page to make it easy to share your memories.

Send flowers to the Frickey family.