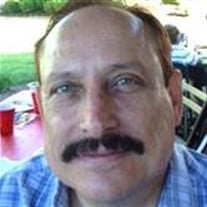 David E. Pilat Born September 18, 1955, Syracuse, NY. He is survived by his beloved partner of 39 years, Gene Gerace. Proceeded in death by his loving parents Peter W. Pilat and Stella Pilat (nee Plis) and his grandparents Veronica Plis Golas (nee Koziol) and Stanley Lorenc Plis; Aniela and Stanley Pilat; Aunt Lottie Ceparski (John) and Uncle Rev. Edmund Pilat. He is survived by brothers Peter (Patricia) and Paul (Cathy) and sisters Mary, Stella, Cathy Katrenich (Tom); beloved uncle of Elisabeth Maio (James), Matthew, Katherine, Kristin Bovee (Eric), Kimberlie Bovee (Mark), Kari, Thomas, Sara and Catherine; great uncle of Evan, Katelyn, Gabriella, Julia, Brooklyn and Charlotte; nephew of Thaddeus Plis (Jane); friend to many in Syracuse. He was a member of the Basilica of the Sacred Heart of Jesus. David loved the theater and arts, especially the opera. He enjoyed working in his garden and watching the birds that came into the garden. He worked for the Syracuse City Assessors office for over 30 years before his retirement in 2011. He was a kind and generous friend to many, performing unknown acts of kindness to many others. He enjoyed travel to places like Brazil, Argentina, Australia, New Zealand, sampling the food, wine, and local culture in places like London, Paris, Italy and Russia. Special thanks to the staff of Upstate Medical Center for their kindness, care and support of David and Gene during the past year. No Calling hours and a private burial will be conducted at a later date. Donations can be made in David's name to Upstate Medical Cancer Center; 750 E Adams St, Syracuse, NY 13210.

The family of David E. Pilat created this Life Tributes page to make it easy to share your memories.

Send flowers to the Pilat family.