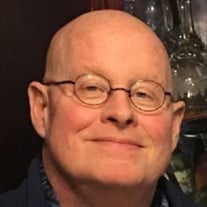 Christopher Wayland Jamison died on August 3, 2020 at the age of 69. Christopher was born in Princeton, NJ, the son of Ruth Baker Jamison and Rev. Dr. Leland Jamison. Christopher and his wife Signe resided in Syracuse and spent a great part of the year in Sawyers Bay Henderson, NY. While he didn't die in Viet Nam, he did die from Viet Nam due to Agent Orange exposure cancer. Christopher naively enlisted in the Army following his high school graduation. He was stationed along the Viet Nam DMZ in 1970. He had great remorse over his and his country's ignominious participation in the senseless carnage of that fiasco. He was a member of Veterans For Peace, local VFP CNY Chapter 51. Christopher received an excellent education at Ed Smith Elementary School, Levy Junior High and Nottingham High School; all schools of the Syracuse City School District. He graduated from Syracuse University and received his Master's Degree from Cornell University– New York State School of Industrial and Labor Relations. Having worked brief stints as a coal miner, steelworker, construction laborer, motel front desk clerk, warehouse worker and a clerical public employee, Christopher learned first hand about the dignity and respect all workers deserve and the value and pride of being a union member. He was honored to have served for over 27 years as a staff union representative with the Civil Service Employees Association (CSEA), Local 1000, AFSFCME. He is survived by his beloved sister Ann, his wife of 43 years Signe Nelson, and two deeply loved daughters - Amanda Jamison and Emelia Thygesen. Due to Covid-19, a private Graveside Service will be held at the convenience of the family at the Onondaga Valley Cemetery. A Public Memorial Service will be held at a future date to be announced. In lieu of flowers, contributions may be made to Veterans for Peace- c/o Nadya Williams Chapter 160, 1436 Grant Ave. Apt. 10, San Francisco, CA 94133, or to the Eugene V. Debs Foundation; PO Box 9454, Terre Haute, IN 47808. Arrangements were provided by Greenleaf Funeral Home, Inc.

Christopher Wayland Jamison died on August 3, 2020 at the age of 69. Christopher was born in Princeton, NJ, the son of Ruth Baker Jamison and Rev. Dr. Leland Jamison. Christopher and his wife Signe resided in Syracuse and spent a great part... View Obituary & Service Information

The family of Christopher Wayland Jamison created this Life Tributes page to make it easy to share your memories.

Christopher Wayland Jamison died on August 3, 2020 at the age...

Send flowers to the Jamison family.