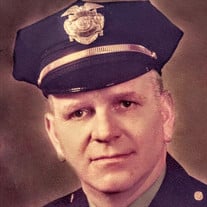 Chester Benjamin Piatkowski, age 96, passed on December 27, 2019 at Loretto Nursing Home, Syracuse, NY. Chester was born in Durhamville, NY, attended Verona Schools in Verona, NY and graduated from Vocational High School in 1941. He is a decorated Veteran of the US Navy, and during WWII he was stationed in England, working as an Aviation Petty Officer 2nd Class, repairing PBY planes. After the war, he was hired by the city of Syracuse as a patrolman for the Syracuse Police force. While serving in the department, he rose to the rank of Sergeant and was in charge of firearms training for the Syracuse Police Department. He also competed on the police pistol teams in competition across New York State, and was extremely proficient as a marksman, with many first place trophies. He was a member of many associations, including: the Polish American Legion Post 14, American Legion Post 113, Police Retirees Association and the Holy Name Society at the Basilica of the Scared Heart, Syracuse, NY. He was active in the Seniors at the Syracuse Polish Home. Even in his later years, he enjoyed taking Polish language classes. He was very proud of being an American and Polish by heritage. Chester is predeceased by his parents George & Anna (Malawana); wife Helen (Orzel); seven siblings: Mary MacDonald, Agnes McBride, John, Frank, Michael, Josephine and Stella, and a niece Janet Galka. He is survived by his daughter, Joyce Marie Piatkowski Behling; son-in-law, Lawrence Behling; step grand-children, step great-grand children, nephews, nieces and great-nephews and great-nieces. Calling hours are from 4:00 PM to 7:00 PM, at the Giminski-Wysocki Funeral Home, 1320 W. Genesee Street, Syracuse, on Thursday, January 2nd. A Mass at the Basilica of the Sacred Heart of Jesus will be at 9:30 AM, January 3rd, with burial following the mass, at Sacred Heart Cemetery. Donations may be made to the Organ Fund at the Basilica. The family would like to thank the staff at Park Terrace, Community Upstate and Loretto for their care at this most difficult time. Also, the family would like to extend special thanks to many people for their support and prayers.

The family of Chester Benjamin Piatkowski created this Life Tributes page to make it easy to share your memories.

Send flowers to the Piatkowski family.