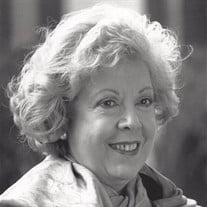 Catherine "Kitty" Michalski Murray, 76, of Liverpool, passed away peacefully at her home. Born December 22, 1936, the daughter of the late Valentine and Antonia (Drengel) Michalski. Kitty was a graduate of Syracuse University, attending colleges of Fine Arts & Home Economics with a major in interior design, with a BS degree, Summa Cum Laude in 1959. Kitty's career started in 1959 with Sagenkahn Designed Interiors. Kitty decided to move to New York to further her career, designing at Copland, Novak & Isreal, Harry Hinson Inc, and Gerber Built and finally at R. H. Macy Inc. where she found the career she was seeking. She was with Macy's for eight years, traveling extensively to Europe, South America and South Africa, designing Macys Department Stores. Kitty decided she had obtained her goals and retired in 1992. During her career, Kitty was a member of the National Society of Interior Design and also co-founded the Empire State Chapter in 1964 serving as Secretary, Vice President and then President. Kitty also organized chapters of N.S.I.D. at both Syracuse and Cornell University. She was a chairperson of three student symposiums in New York state, and had speaking engagements at Skidmore, Cornell, Plattsburg, Syracuse and Rochester Colleges. She was also a member of the board of directors of the Syracuse University Alumni Club. Kitty is survived by her brother, Ted (Dorothy) Michalski; her aunt, Mary Dorosz and several cousins. Family and friends may call 2 to 4 p.m. Sunday at the Giminski-Wysocki Funeral Home Inc., 1320 W. Genesee St. in Syracuse. Burial will be private. In lieu of flowers, contributions in Kitty's name to the CNY SPCA. 5878 S. Malloy Rd. Syracuse, NY 13211.

The family of Catherine "Kitty" Michalski Murray created this Life Tributes page to make it easy to share your memories.

Send flowers to the Murray family.