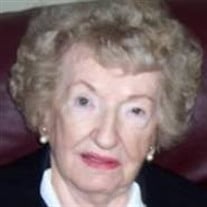 Alice Patrica (Wisinski) Martin, 90, passed away on Friday, June 24, 2016. Alice was born on March 7th, 1926 in Syracuse, New York. She was the daughter of Louis Wisinski and Adela Nardo Wisinski. Alice was a devoted wife, mother, grandmother and great grandmother. She was predeceased by her husband, Nicholas James Martin, to whom she was married for 61 years; her siblings, Helen, Adela, Frederick, and Henry. Alice is survived by her son, Nicholas J. Martin Jr. (Patricia), her daughter, Sandra L. Martin, her granddaughter Michelle M. Melfi (Johnsteven), her grandson, Alexander D. Martin and two great granddaughters, Anna and Sophia Melfi; her brother Louis and sister in laws Barbara and Jean and several nieces and nephews. A memorial mass will be held on Monday, June 27th, 2016 at 9:30 am, at the Basilica of the Sacred Heart of Jesus; 927 Park Avenue, Syracuse, New York.

The family of Alice Patricia (Wisinski) Martin created this Life Tributes page to make it easy to share your memories.

Send flowers to the Martin family.